From September 6th to September 19th The Bundle Jungle pregnancy & parenting forum will be hosting an online charity auction to raise awareness and funds for Cheshire and North Wales Milk Bank, a charitable organisation, funded entirely by donations and fundraising, who ... Read Article

Breastfeeding mums are being urged to donate milk to help sick or premature babies. YEARS ago donating breast milk to help another woman’s baby was fairly commonplace. But today there are just 12 milk banks left in the UK and many people ... Read Article

Neonatal Conference – Donor Breast Milk in the care of the Neonate

Hosted by The Human Milk Bank and the Paediatric Department, delegates attended from over 25 hospitals from across the UK and Spain. Neonatologists, paediatricians, immunologists and health professionals interested in infant feeding assembled to exchange knowledge and discuss and debate the case ... Read Article

The Dragon Boat race was again great fun! We didn’t make the final race off but achieved good times with our paddling. We raised £450 which has bought a new fridge for the milk bank. Lynda and her team would like to ... Read Article 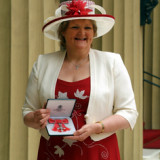 Having been advised of my MBE award away back in November 2008 it seemed an age before the summons arrived to attend Buckingham Palace to receive it on 28th May. With the date finally set my husband agreed to attend to all ... Read Article

Lynda and her team would like to express their thanks to all the people who helped, participated and attended the Eaton Hall Gardens Open afternoon on Sunday 24th May. We had such a beautiful warm day, there were thousands of people and ... Read Article

Liverpool actor Ricky Tomlison has donated £200,000 to our Human Milk Bank and unveiled a plaque at the Countess of Chester Hospital on September 25th 2008. He also confirmed his patronage for our charity for 2008. Ricky said: “Due to my own ... Read Article