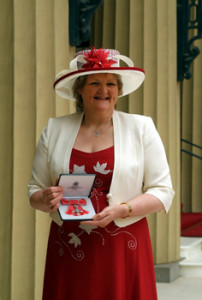 Having been advised of my MBE award away back in November 2008 it seemed an age before the summons arrived to attend Buckingham Palace to receive it on 28th May.

With the date finally set my husband agreed to attend to all the logistics around travel, accommodation and rounding up our two sons but asked to be excluded from all things couture. This turned out to be an excellent arrangement with the Coulter family reporting to the palace gates at the very precisely required time. It initially felt like leaving the country with passports etc being checked but once inside the gates you begin to sense what it must be like for the Royal family as hundreds of pairs of tourist eyes follow your progress across the forecourt.

The investiture ceremony is conducted like a military operation. Unsurprising I suppose since most of the organisation is overseen by military personnel. With each recipient of an award permitted 3 guests and 80 recipients on the day we were quite a crowd in the waiting area and I thought it was rather nice that all sorts of different awards, both civilian and military, were included together. Dr Bernard Ribeiro, President of the Royal College of Surgeons received a knighthood.

The butterflies start when the call comes to ascend a grand staircase flanked by soldiers standing rigidly to attention at the bottom of each flight. It is at this point that recipients and guests are separated with recipients being briefed on protocol etc. Having entered the palace after 10.00 o’clock the ceremony begins promptly at 11.00 am with Prince Charles (in my case) arriving to take his place on the platform at the front of the seated guests. There is lots of pomp and ceremony with a military band playing music and honour guards and a myriad of military ushers etc.

My turn finally arrived to proceed forward to Prince Charles with my name being called out over the public address system. The curtsy was easy but when I arrived in front of him I realised that my hat had defeated the military organisation as he struggled to see my face beneath. I am always asked about the content of the ensuing short conversation and must admit to being taken totally aback when Prince Charles immediately opened with, “I hear you have opened a human milk bank in Chester”. I doubt if I would have recovered if he had followed that up with, “Have you managed to get cover for the night shift?” but the conversation stayed firmly on milk banking as he struggled to get a word in edgeways but he did finally manage to say, “Amazing”. He may have thought he was well informed on milk banking but he is more so now.

The whole day was a surreal experience with everything going like clockwork as soon as one enters the palace and with the sun thankfully shining throughout it was wonderful to mingle with everyone in the inner courtyard of the palace and enjoy the moment. It seems an eternity since I first broached the idea of opening a human milk bank and awards couldn’t have been further from my mind and I could have filled the palace with all the people who have contributed to the milk banks’ success. It was an occasion I will always treasure for the rest of my life.