I went for a routine 30 week scan and they discovered Baby was measuring small – probably due to the fact they couldn’t find any flow from the placenta to the baby. 3 hours later, I was in theatre having (my second) emergency Caesarean section, and our daughter Nevaeh May was born at 2lbs 5oz.

I started trying to express a few hours later with help from the midwives and Baby feeding team but it wasn’t until day 3 when I finally got some colostrum coming through.

Nevaeh was not doing so well and amongst other things, was nil by mouth due to the worry she was developing Necrotising Enterocolitis (NEC). I was told that when her tummy settled down the best medicine we could give her was my breastmilk. A few days after her birth, she was given 0.5ml per hour of my milk!

Every day I was expressing 8-12 times a day/night. By 3 weeks I was producing over 1 litre of milk a day and one of the nurses, Nicole (from Scunthorpe NICU) suggested I look into donating my milk. Applying was easy and I got started as soon as I’d finished my courses of antibiotics.

What made me really passionate about being a Milk donor is, if Nevaeh had been well enough to have had milk on her first day, I couldn’t have done it! I would have needed donor milk for her. And as Nevaeh had frequent scares of developing NEC, breastmilk was her best chance of getting better and stronger.

You never think it will be you who will have a premature or sick baby, and it is a really hard, scary situation to be in. Other mums may experience not being able to produce milk straight away too which would be vital in their baby’s recovery so at least with donor milk they have that fighting chance right away. 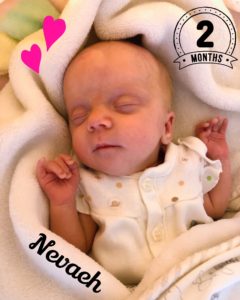