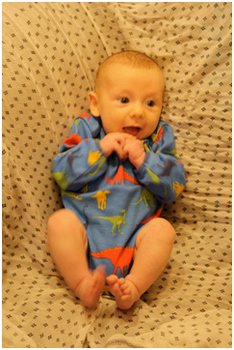 When my son Hugo was born on the 20th of November, two days after my due date, there was no doubt in my mind that I was going to breastfeed him. As soon as he was born he was very eager to feed, he latched on and away we went. During our first day in hospital it suddenly became very painful to feed. One of the breastfeeding support workers came and helped me to get him latched on properly. The next day we were discharged and very happy to be home.

When our midwife came the following day to weigh Hugo he had dropped from 9lbs 9oz to 8lbs 10oz, she wasn’t all that concerned as he was a big baby and was feeding regularly and having dirty and wet nappies. She noticed then as well that he had a tongue-tie, which could maybe mean that he wasn’t feeding as effectively as he could. He was referred to a consultant at the hospital and the following week we went and he had it snipped.

Over the next 5 weeks Hugo’s weight was going up but only very slowly, every 5 days he was weighed and he was only gaining 1 or 2ozs each time. As he still wasn’t back to his birth weight yet after 5 weeks our health visitor booked us to see the GP and he in turn sent us to the children’s ward at the hospital to have him checked out by a pediatrician. While we were waiting to see the pediatrician I expressed my concern to one of the breastfeeding support midwives that I didn’t want Hugo to be given formula and I didn’t want to be pressurised by the doctors into giving it to him.

She phoned me back to say that she had managed to get a hold of some donated breast milk from the milk bank. I didn’t even know that such a place existed or that people donated breast milk. When the doctor came to us he examined Hugo and decided that we should stay in hospital over night so I could express to see if I was producing enough milk for him. Hugo was also to have blood tests to make sure that there wasn’t anything wrong with him. This was on New Years Eve.

The following morning, new years day, as my husband doesn’t drive, my brother and sister in law took him to Chester to pick up the milk that the midwife had sourced for us. After spending a miserable night in the hospital we were discharged on the understanding that we were to give Hugo an extra 300mls of donated milk per day as well as breastfeeding on demand still. In between feeds I expressed and started to take some herbal tablets to increase my milk supply. When we left the hospital Hugo weighed 9lbs 3ozs.

The next day we started to give him bottles. We could tell a difference in him straight away, he was a lot happier and more contented. Five days later he was weighed again at 9lbs 13oz and we were relieved to see results on the scales.

Hugo now weighs 12lbs and is a very happy three month old. I am so grateful to the breastfeeding support midwife, Angela for introducing me to donated breast milk and to Lynda at the milk bank for giving us the donated milk so that my baby could have the best start in life.