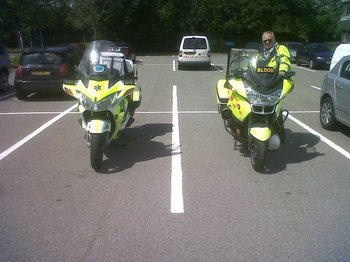 On Thursday 16th June, riders from Devon Freewheelers, Freewheelers EVS, SERV and NW Blood Bikes all worked together to get two hospitals out of a difficult situation. An equipment failure at the Oxford Milk Bank meant that stocks of human breast milk, used to feed very premature and sometimes very sick babies, were running critically low.

Some milk was available in Exeter – 160 miles away – so the milk bank called on the services of NABB members. Devon Freewheelers picked up the two boxes of frozen breast milk and put them onto the back of their bike and rode up the M5 to the Somerset border, where they handed over to Freewheelers EVS. They in turn rode up to Swindon where they met with SERV who took the much needed milk up to Oxford. The transfer from Exeter to Oxford was swift, safe and fuss-free.

Earlier that same day, the neonatal intensive care unit at Bristol’s Southmead Hospital had run out of breast milk. The hospital would normally source supplies from Oxford, so instead had to look elsewhere. That is where NW Blood Bikes stepped in and collected a box of frozen breast milk from the Countess of Chester Hospital and rode it down to Redditch, close to the M5/M42 junction, where it was handed over to a Freewheelers EVS rider to complete the 175 mile journey from Chester to Bristol.

These two separate transfers of frozen human breast milk in one day, both of which were done completely free of charge, are a perfect example of how NABB brings together the different blood bike group across the UK.

Lynda Coulter comments: “This developing charitable transport provision is a great step forward for us in the North West Milk Banking Service. It will enable us to further develop our transportation of milk to hospitals in the region. This will also support our constant efforts to be cost efficient. We are so looking forward to working with the NW Blood Bikes in the near future. A very inspirational and altruistic team”.