Mair Wallroth was diagnosed halfway through her pregnancy but went on to give birth to a healthy baby boy called Merlin Ray. Despite treatment the mum-of-two lost her fight for life last month at the age of 41. 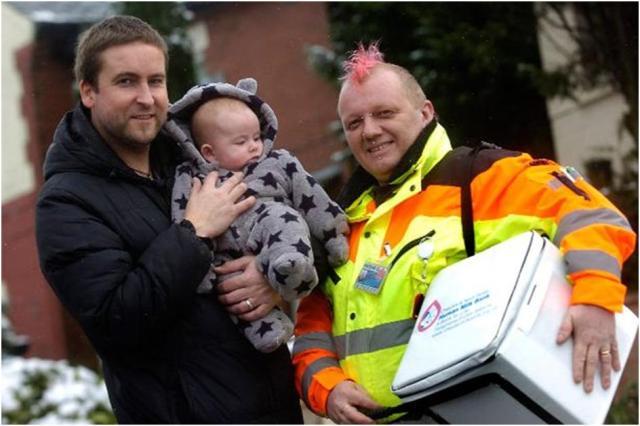 A baby whose mum died of breast cancer just weeks after he was born has inspired a fundraising campaign to help other mothers battling the disease.

Mair Wallroth was diagnosed halfway through her pregnancy but went on to give birth to a healthy baby boy called Merlin Ray.
Despite treatment the mum-of-two lost her fight for life last month at the age of 41.

Now Blood Bikes Manchester – who delivered vital donor breast milk to her Hadfield home while she was unable to produce her own – has pledged to buy a special motorcycle to help mums like Mair and christen it ‘Merlin’s milk bike’.

The Hyde-based charity was set up to take pressure off the NHS by delivering emergency blood supplies during the night and at weekends. In just a year the ‘night riders’ are thought to have saved hospitals, including Tameside, thousands of pounds which would have been spent on couriers and taxis.

As well as blood, bikers also ferry donor breast milk from The Countess of Chester Hospital to local neonatal units – or in Mair and her husband Pete’s case, their home. Pete, who is also dad to Martha, three, said: “By having the donor breast milk it meant that Merlin was able to get the same start in life as his older sister Martha.

“Merlin was the first baby that the Blood Bikes were delivering the milk to directly. I think by coming to our home they were seeing first-hand the difference it makes and they were able to talk to our family.

“When we found out they wanted to name the bike after Merlin we were really touched by it.”

Bikers want to raise £10,000 to buy a specially-adapted motorcycle which has room to carry large quantities of milk. Paul Redfern, chairman of the charity, had to deliver Merlin’s milk by car.

He said: “We don’t often get to hear who the milk is for but obviously going to the house we got to know the family. Before Mair passed away I told her and Pete what we wanted to do and they were really overwhelmed.

“It means when Merlin is older we can say we met your mum and we decided to do this. This little baby is our first story. We are just gutted it ended the way it did.”

Anyone who would like to help the Merlin’s milk bike appeal can contact the charity via www.nwbbm.org.uk.